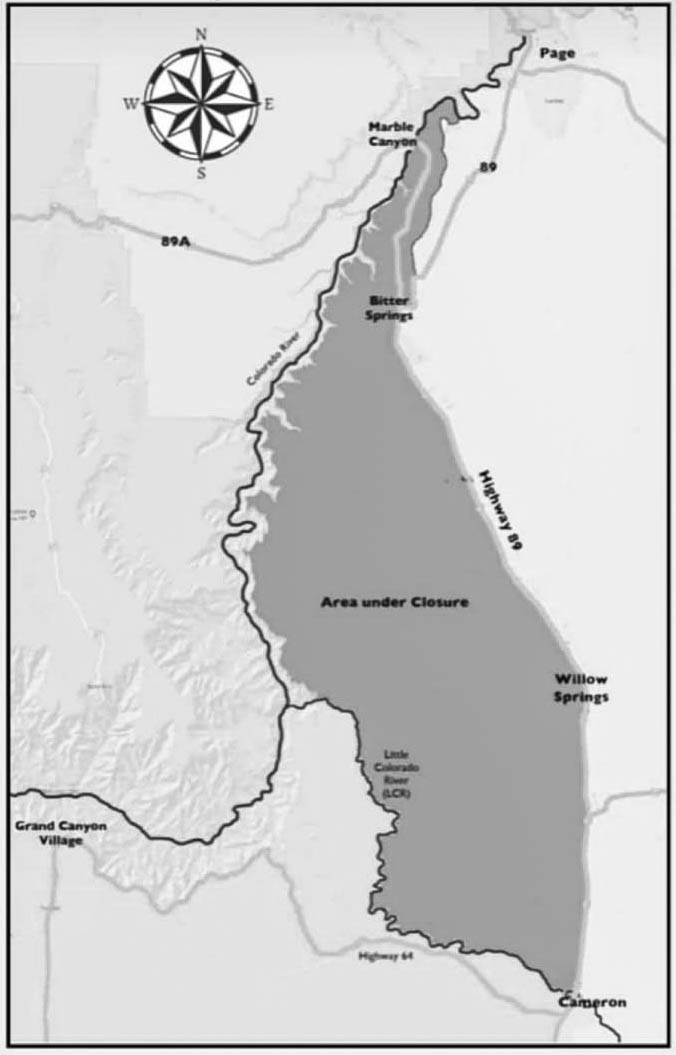 GRAND CANYON NATIONAL PARK – The Navajo Parks and Recreation Department has suspended issuing non-commercial backcountry permits for the East Rim of the Grand Canyon, an area which is on Navajo Nation lands. Hikers and campers will no longer be issued permits and all non-tribal use of the lands are prohibited.

The map in this article shows the areas covered by the closure.

Navajo officials suspended the permits in May 2019 after a Bodaway-Gap Chapter resolution, which was presented in a regular chapter meeting on Dec. 8, 2018, suggesting the tribe’s park and recreation department failed to fulfill its mission of overseeing and protecting the parks.

The resolution specifically targeted non-commercial backcountry permits issued to hikers or campers for the Little Colorado River Tribal Park and the Marble Canyon Tribal Park, both of which fall within the chapter’s jurisdictions. Currently, there is only one permitted commercial tour company, Sacred Edge Tours, based in Page and owned by Franklin Martin.

Martin, a Bodaway-Gap registered voter who grew up in the area, said he was shocked when he watched the use increase in recent years without any enforcement and protection of the lands.

After many unresolved complaints issued to the Navajo Parks, Martin worked with the chapter to create a resolution to try to protect the land.

“We were finding more and more non-Native visitors. Tourists hiking and camping out there,” Martin said. “After they left, we found burn spots from camping on the rim. We found tire tracks on vegetation. They had hit cattle and sheep (with vehicles). Once we came across guys riding razors (ATVs) in circles in donut shapes on the land.”

Martin said he even found etchings on sandstone and vegetation used by Navajo medicine people trampled on and destroyed.

The chapter resolution cited many reasons why backcountry permits should be halted including damage from building and abandoning camp fires on sensitive desert land, driving off road, harassment and injury to livestock and wildlife, use of drones, defacing ruins and rock formations, graffiti, human waste and litter issues, including improperly disposing of toilet paper and trash.

Martin said he is aware of motorcycles driving cross-country through sheep and other livestock herds. Sacred Edge Tours prides itself in protecting the land. Their tours employ a “Leave No Trace” ethic, including building campfires in steel containers to prevent the land, rocks and vegetation from being charred and burnt. He has provided portable toilets to address the human waste issue.

Navajo Parks has the responsibility of overseeing all of the parks on the Navajo Nation including Monument Valley, Antelope Canyon, Four Corners Monument and the Little Colorado River Gorge. Unlike National Parks and Monuments managed by the federal government, the tribal parks do not have onsite park management and few employees are available to support the visitors and enforce the laws protecting the land.

Navajo Park’s mission is, “Protect, preserve and manage tribal parks, monuments and recreation areas for the perpetual enjoyment and benefit of the Navajo Nation….” To achieve its mission, the department wrote it would offer visitor services, enhance visitor experiences, strengthen partnerships with the local community, offer interpretation, beef up staff development and enforce tribal laws.

Franklin expressed concern that the permit fees paid by visitors go to the tribe’s general fund and little of it returns to the parks to hire rangers or provide facilities for visitors.
According to Save the Confluence coalition website (savetheconfluence.com), Martin Begaye, the Navajo Parks and Recreation Department manager, said the department agreed with the chapter’s outcry over enforcement issues.

Begaye said, “We decided it’s best not to issue more permits. We are in the process of getting rangers in that area. Rangers who can watch camping sites and inspect permits that are issued.”

Begaye anticipates that rangers could be on duty as early as next spring and the backcountry permit program may be reinstated. Until then all use is prohibited unless through a tour company.

Martin and Bodaway-Gap Chapter members complained for decades about hikers entering the canyon or camping on the canyon rim. The department’s Little Colorado River Tribal Park office in Cameron, Arizona, issued permits without notifying the chapter or land users, raising concern from local residents. Many non-Native visitors have been camping and hiking in the area without a permit and without regard for the protection of the land. Martin said that those who go onto tribal lands without a permit is not unlike someone setting up camp and walking around someone’s private yard without permission. In his view, it is plain and simply trespassing on tribal lands.

The now-closed land includes ruins, sacred locations and plants used by Navajo medicine men. Most of the lands are used for grazing of livestock. Visitors are often unaware of how to respect these traditional uses.

When Martin asks them to leave, some become aggressive and refuse to leave. Many show the permits issued to them by the tribe.  The chapters issuing permits rarely coordinate with the residents of the lands. With more permits being issued and even more visitors exploring the lands without a permit, the lack of rangers to monitor and enforce the laws has made the situation untenable to local residents.

The Navajo Nation since was prevented from development due to the former Bennett Freeze.  The federal government “froze” development on tribal land until 2009 when the ban was lifted. While the ban was in effect, no development on tribal lands could be done, including development in the tribal parks. Martin suggests building or adaptive reuse of abandoned buildings in the area to provide visitor information and educational facilities and serve as a home base for rangers to patrol the parks not unlike National Parks.

The issue of permits for the East Rim is complex, not unlike the struggles that face many U.S. National Parks where commercial tour companies come face to face with those who wish to explore the land on their own. Over time, the Navajo Nation plans to manage use in this and other scenic areas on tribal land.  For the time being the East Rim of the Grand Canyon is closed to non-commercial backcountry use until further notice.