By: George Hardeen/Special to the Chronicle - Updated: 3 weeks ago

PAGE – As the massive Navajo Generating Station is slowly reduced to mountains of metal for recycling, a few pieces of it were saved and turned into a lasting and cheerful memorial of public art.

Visitors entering the Page Sports Complex walk past two unique benches made of materials from the power plant and the Black Mesa & Lake Powell Railroad that delivered 24,000 tons of coal each day.

The benches each rest on four railroad ties. Steel wheels from the train’s coal cars support them. On each wheel, blended into the artistry of welding by its Navajo creators is the familiar motif borrowed from a Navajo wedding basket.

Rising from the back of one bench are the now-gone iconic smokestacks once known to the employees of NGS as the “Three Sisters.” Seated on the deck of the other bench is “Spring Man” on his lunch break.

The visionary creators of the benches are Keno Zahney and Maretta Begay, both who worked in the NGS Railroad & Heavy Equipment department during their final months at NGS on a special assignment of designing and building the benches.

When it was announced in February 2017 that NGS would close, the idea to do something for the town to remember it was here – other than Page Attacks Trash and the PERA Club – came to NGS Maintenance Manager Shayne Jones.

“We should do something to memorialize NGS,” he said. “You look around town and there was really nothing that signified that NGS had been there.”

So, Jones sent an email to NGS employees asking for ideas.

“Hey, I know there’s some great artists out there and others that have some great concepts,” he said. “Put your thinking caps on.”

Jarison Littlesunday sent an amazing power point that used the guillotine gates from the scrubbers, Jones said. Zahney, who worked as an NGS machinist for almost five years, submitted his concept for the benches featuring the spring man “which I thought was the highlight of the bench.”

Jones got together with NGS Railroad & Heavy Equipment Manager Harold Watkins to give Zahney the assignment, and Zahney got to work assembling axles, ties and other parts.

But it wasn’t a one-man job. Zahney was going to need some highly proficient, detailed welding help, Jones said. So Maretta Begay, an NGS metal fabricator for five year and exquisitely skilled welder, stepped up and was assigned to the task.

Asked what he thought of Begay’s welding ability, he said, “Aw shoot, she blew me away. I don’t have to tell her anything. She knows what rods to use, what temperatures to set them at.”

“Being a woman in this field you have to be your best,” Begay said. “You have to sell yourself.”

Begay gives credit to Zahney for the imagination brought to the benches and to Jones for knowing she wanted to be part of the two-month project.

“Keno is the one who came up with the idea of the benches made out of railroad ties,” she said. “And we were thinking of a guy on his lunch break, just taking a break, leaning against the railroad ties. I’ve seen that happen. He’s just tired.”

And from that, Spring Man was born.

As the benches took shape, Begay said other workers would come by to see it come alive.

Both remember one of the more difficult parts of the bench construction was pounding in the railroad spikes.

All the pins were put in with Begay and Zahney taking turns, she said.

“I was teasing Maretta and said, ‘I have a whole new respect for the people who did this way back before they had pneumatic tools to drive these in,” Zahney said. “It was just a lot of work. That girl’s strong!”

Once completed came the task of deciding where to place them. Lynn Cormier, the community and recreation services director, said Page Public Works Director Kyle Christiansen told her the benches were gorgeous and that they just had to do something great with them.

“I said I know!” Cormier said. “Let’s just find a place and pull the trigger.”

They decided the Sports Complex would be an ideal location.

“We had this onslaught of softball tournaments coming in,” Cormier said. “People were just coming up and asking all of these questions about these benches. It was really neat because of all the fine details and you have Spring Man on one of them, you can sit there and watch the games.”

While the entire town can be proud of this art built from pieces of NGS, Zahney and Begay say they will always be especially meaningful to them.

“They’re awesome,” Begay said. “It makes me feel really good to know I helped design and built them. It was an awesome experience. It makes me proud.”

Zahney said he reflects on how these benches were just a sketch on paper.

“It was an honor to bring the benches to reality,” he said. “To actually sit down on them was a great feeling. It means much more now that the stacks were taken down.” 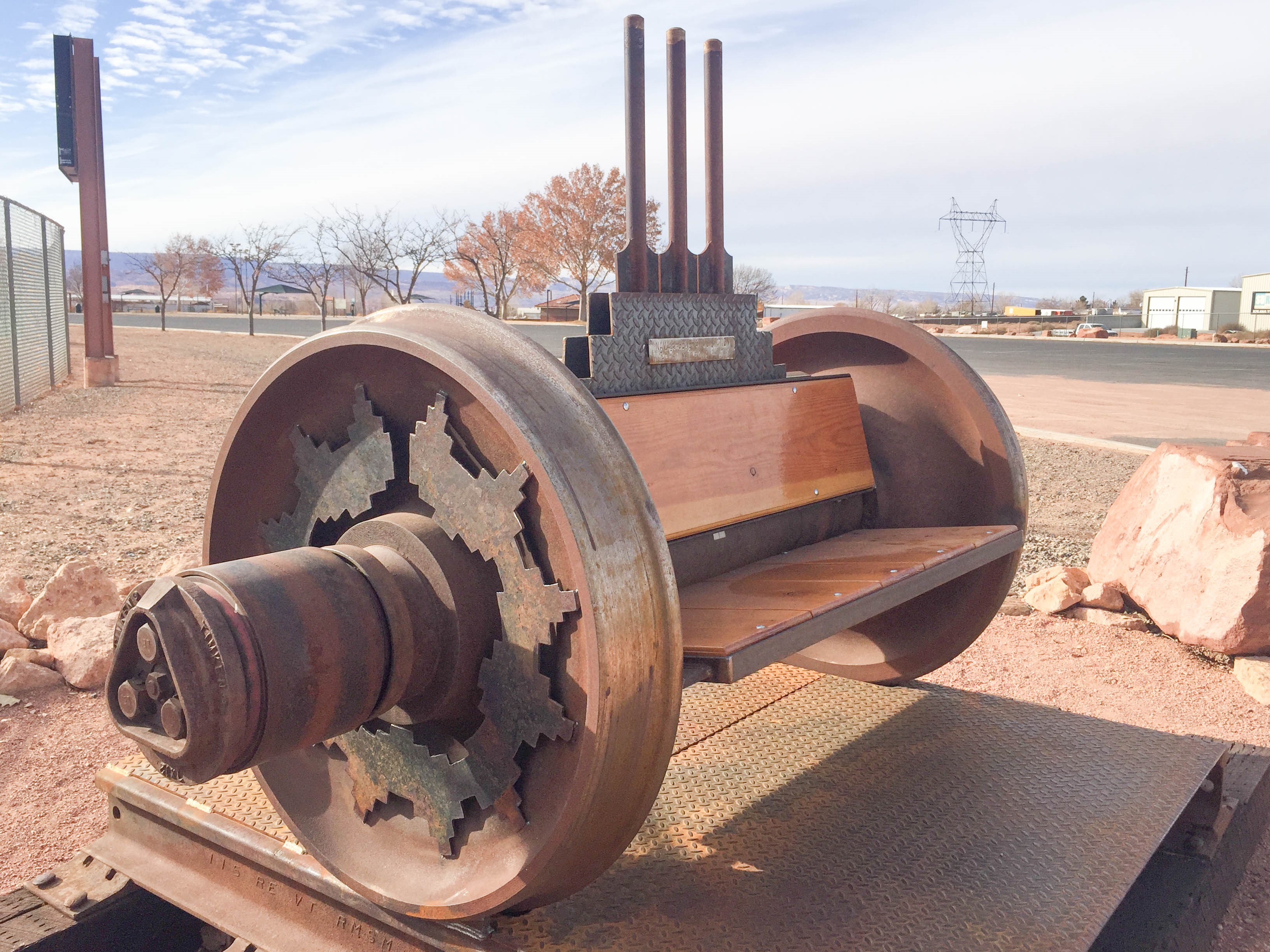